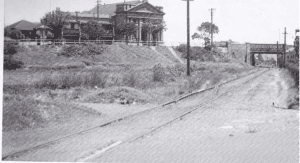 A Baptist witness has been present in the Hunter Valley from early in the region’s history, with the Hinton Baptist church (established in 1857) one of the oldest in rural Australia.

The Newcastle Baptist Church was established in 1861, after 5 men William Gibbs, David Morgan, Thomas Evans, David Young and David Howells had been meeting to pray for about 12 months. The first property for the church was leased on the corner of Dawson and Pitt St. (Pitt St was later re-named Queen St and is behind the current church property.) The first pastor, Rev George Whitefield, was appointed in 1862.

After considerable difficulties, the church was re-organised under the guidance of Rev Philip Lane, who moved down to Newcastle from Hinton in 1864. Rev Lane served as pastor for 3 years before returning to Hinton. The most influential early pastor was Rev Seth  Jones who, from August 1885, served the church for 19 years until his untimely death at age 56. Prior to his arrival from Wales, Jones had been influneced by the London preacher Charles Haddon Spurgeon, and during his ministry a new church building became necessary.

Thus in 1889 work commenced on the Newcastle Baptist Tabernacle – modelled on  Spurgeon’s Metropolitan Tabernacle in London. The foundation stones were laid on Christmas day 1889 with the building being completed and opened in 1890, much to the delight of not only the congregation, but indeed, much of the population of Newcasltle itself, with extensive coverage of the opening reported in the Newcastle Herald.

Members of the Tabernacle were also responsible for the commencement of Baptist ministry in various suburbs as Newcastle expanded. Three of those ‘missions’ at Wallsend (1865), Islington (formed as a separate church in 1888) and Merewether (commenced as a Sunday School in 1904 with services begun in 1910) continue as strong churches up to the present.

Social concern has been part of the church’s DNA from early in its history, with support for the poor and even international aid given following an earthquake in 1907 and the Maitland flood of 1948. During WW2 the church formed a branch of the Baptist National Service Auxiliary to care for men and women in the Armed Forces, and the Tabernacle War Savings group raised over 5,000 pounds for the war effort. In more recent years, as the church members have responded to similar calls for assistance, support has generally been directed through Baptist World Aid.

Music has also been an integral part of the Church’s life and ministry. The Tabernacle was designed with good acoustics which have been utilised by choirs and orchestras to support the congregation as well as for special performances.

The Newcastle Baptist Church is part of the Baptist Churches of NSW and ACT, and also the Hunter District Baptist Association. We also have links with other Christian churches serving our community, especially through the Newcastle SRE Board’s ministry in our local high school and primary schools.

The Newcastle Baptist Church meets in the Baptist Tabernacle, which is situated in the historic Civic precint of central Newcastle, across Laman Street from Civic Park, and beside the Regional Cultural Centre and Art Gallery. The Tabernacle was modelled on Spurgeon’s Metropolitan Tabernacle in London, and was built to replace the previous building on the site.

We celebrated the 150th Anniversary of the Newcastle Baptist Church in 2011. 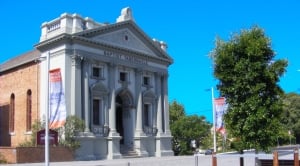